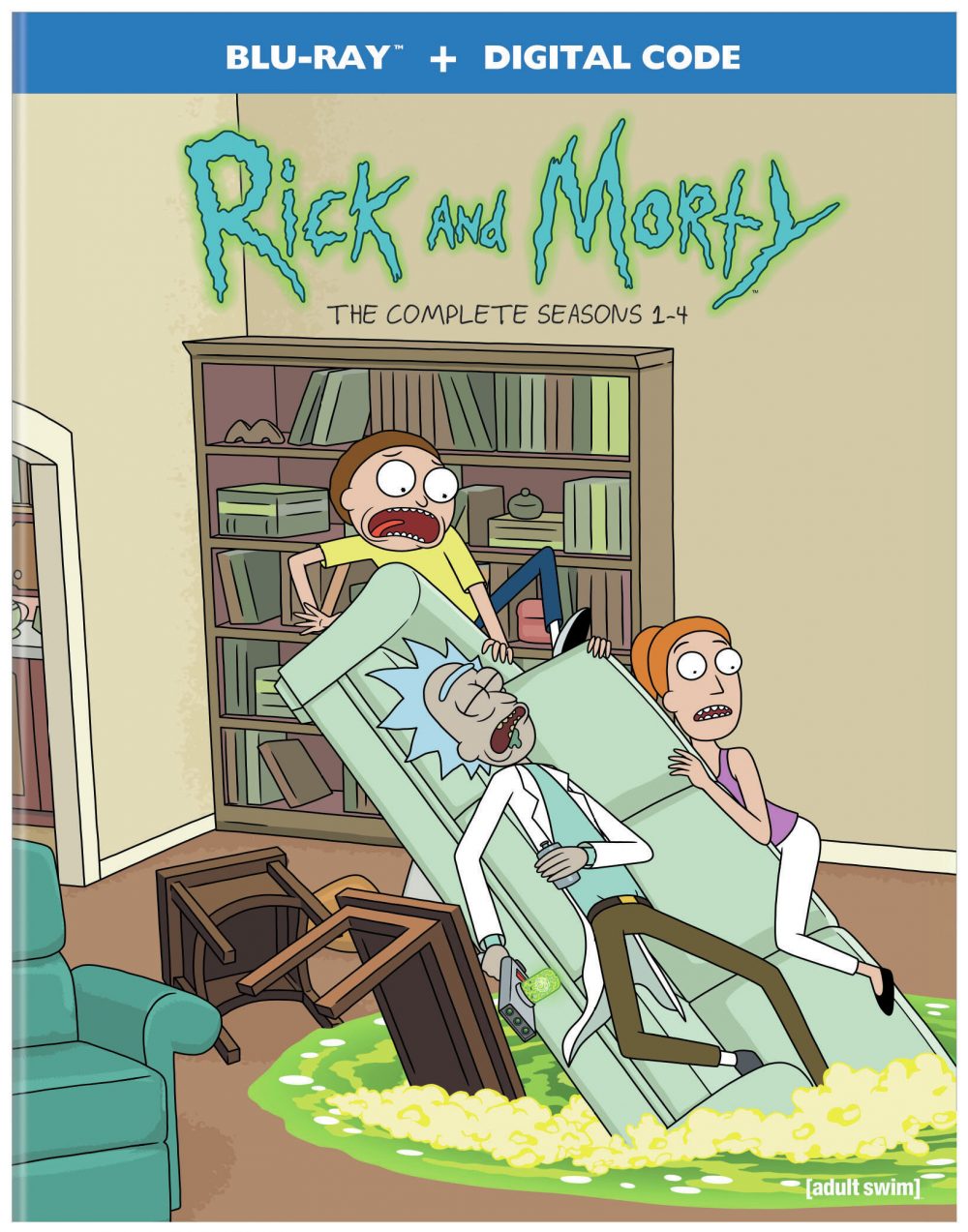 With solid Sci-Fi smarts mixed with family dysfunction and farts, Rick and Morty Seasons 1-4 is, ingeniously, a world away from any semblance of good clean fun.

Few animated series’ spring to mind when you try to smash cerebral sci-fi storytelling with slap-stick cartoon antics… “smartoons” if you will. Iconic pioneers such as Looney Tunes and The Simpsons… sure, sans the Sci-Fi. So goes the scathing politically incorrect satire of South Park as well. But in the case of Rick and Morty, nothing current seems to come close to the unabashedly unorthodox and unflinchingly unapologetic antics of this madman and his Morty.

Granted, there’s a certain amount of inner embarrassment knowing that we probably shouldn’t be watching this… or laughing so hard at this… or secretly agreeing with Rick’s warped sense of God-like hubris, but on the other hand… this show is squanching hilarious! But not only that, it’s intelligent. OK, yes, granted throughout the seasons Rick does turn himself into a pickle… and concocts an “insane in the love veins” love-potion for Morty that makes half the town wanna get-down… and stops time for more than a year while he, Morty and Summer act out every depraved urge each has with their immobile neighbors… and is constantly trying to scam, skim, exploit or extort his needy family to a point of almost certain insanity and/or death. But hey, that’s the price of being related to the smartest man in the Universe… right?

With all of that corrupt comedy in mind, it’s hard to pick a favorite season let alone episode, and luckily now we don’t have to, as Rick and Morty: Seasons 1-4 is now available to quench that bird-person thirst. And thank goodness too… my interdimensional cable just went out and I’m down to my last handful of Kalaxian Crystals.

Now, a bit of warning about the disc extras… there aren’t any. Well, there aren’t any new extras, that is. So, for those of us hoping to cash in on some extra features for the extra expense, new packaging and an exclusive poster are the only additional highlights to the set. No mention of just how “exclusive” the insert poster that comes with the set is, which would’ve been nice, i.e. limited-edition x/10,000 run or some variation. But the 18” x 24” poster is colorful and compact, making it – if COVID ever gives us the chance to congregate again – a nice Comic-Con stash just waiting to be signed by the cast.

Granted, the previous season set offerings were overflowing with extras, so there’s little to be too upset about. It’s just marginally disappointing given the fact that season one’s run was more than seven years ago now and – I’m sure – much has changed since that 2013 launch.

So, with solid Sci-Fi smarts mixed with family dysfunction and farts, Rick and Morty Seasons 1-4 is, ingeniously, a world away from any semblance of good clean fun.

Studio Synopsis: After having been missing for nearly 20 years, Rick Sanchez suddenly arrives at daughter Beth’s doorstep to move in with her and her family. Although Beth welcomes Rick into her home, her husband, Jerry, isn’t as happy about the family reunion. Jerry is concerned about Rick, a sociopathic scientist, using the garage as his personal laboratory. In the lab, Rick works on a number of sci-fi gadgets, some of which could be considered dangerous. But that’s not all Rick does that concerns Jerry. He also goes on adventures across the universe that often involve his children, Morty and Summer.

Season 4
– A Day at Rick and Morty: Inside Season 4
– “Inside the Episode” for Every Episode
– Creating Snake Jazz
– Directing Rick and Morty
– Samurai and Shogun
– Prop Process
– Character Creation
– Animation Challenges