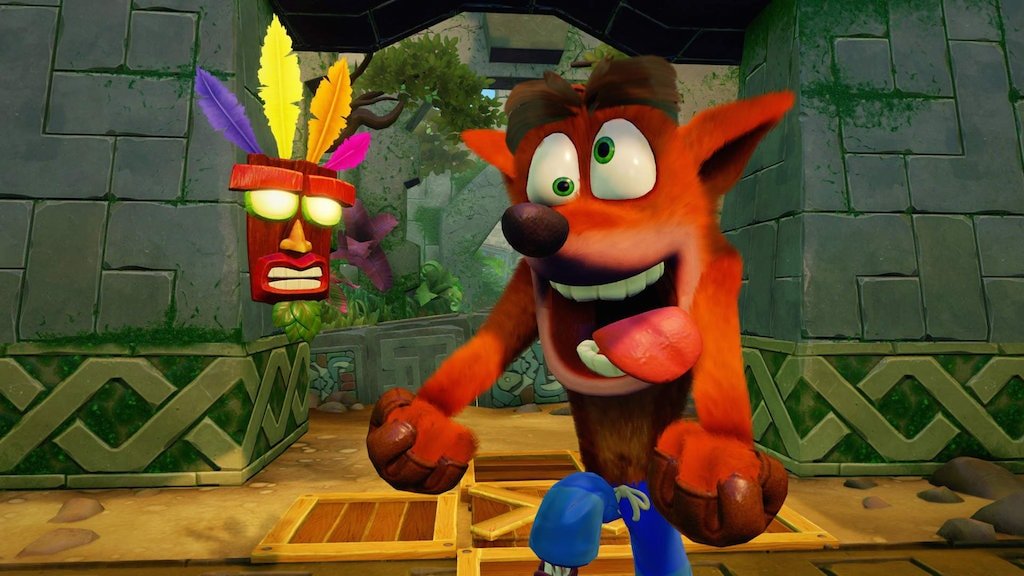 Ok so, You’re running for your life from some random boulder while simultaneously collecting fruit, smashing boxes, and getting crystals.

The game has been redesigned to breathe in new life into the characters and story. The game also keeps its classic charm to be just as enjoyable for veterans and newcomers alike. For some, the pure nostalgia of Crash is enough to satisfy but the game goes above and beyond to blow all expectations out of the water. Though the original creators, Naughty Dog, was not involved new publisher Activision worked with Vicarious Visions to step up all the stuff that made the crazy spinning animal our favorite once again. The N. Sane Trilogy has come a long way when you compare to how the games looked back on the PlayStation 1.  I’m not ashamed to say that I almost cried when that first level loaded in; seeing all the vibrant colors, hearing the familiar music and sounds, and watching the same actions and scenes that I originally loved was such a great feeling. It was like watching a black and white cartoon but in color, Crash Bandicoot retains everything that made Crash great with some added polish where it really counts. The remaster combines the first three games of the series that were released for the PlayStation 1 way back when. The premise for all three is relatively simple: you play as Crash Bandicoot and must run through each level from a limited 3D perspective as you collect crystals, fruits, break boxes, and beat bosses. Though the games are relatively short there are some minor improvements that are well appreciated.

For one thing, auto-saving helps fulfill modern expectations. The running, jumping, and spinning mechanics don’t differ from the originals but the remasters now give players the choice to play as Crash or Coco, Crash’s Sister. Coco still has the same abilities but with different animations, the change may be purely cosmetic but is still greatly appreciated.

Even though the games are short the challenges they offer are more than enough to keep you busy. Crash Bandicoot is a game that does not take kindly to error or mistakes. The game can be frustrating and has an extremely small margin of error when it comes to platforming. This can be even more difficult since some jumps in the game are tiny to overlook or are viewed at awkward camera angles.  This can be a huge turn off for any game but I think this is what gave Crash its charm.

As a character, Crash is this silly animal and seeing all the different animations makes me laugh and de-stress in the most frustrating situations. Crash’s facial expressions also give some light heartedness, for example: there is a notable level where Crash must run away from a boulder. The game makes you run toward the screen which adds some difficulty in knowing where jumps are but at all times you see Crash’s panicked face which I cannot help but laugh at as I try to keep him alive. When I was younger Crash Bandicoot was one of the first games I ever played. Naturally, playing this again already hits me pretty hard to the point where I was almost crying when that first level loaded up. Seeing everything that made me fall in love with game and seeing it done in such a careful and planned out manner makes me hopeful that this is not the last time we see Crash and his adventures. Nostalgia is always a big factor in remastered games. As the time wears on and we look back on our lives we realize that the games of our childhood aren’t the gems of gold we think they are. Granted, I wouldn’t trade any of those moments for anything, but critically nostalgia doesn’t make a game good. Crash Bandicoot N. Sane Trilogy may be a remaster but it still feels like a brand new game. The game still has its frustrating moments from all those years ago but that is why I liked the game so much. Seeing the new graphics and subtle differences from the originals is like putting a fresh coat of paint on a wall.  This remaster isn’t here to water everything down but brings a classic into a new time with renewal for older fans and newer ones too. With everything from my childhood still intact and some very welcome additions included to make this game relevant Crash Bandicoot N. Sane Trilogy gets 10 wumpa fruits out of 10.