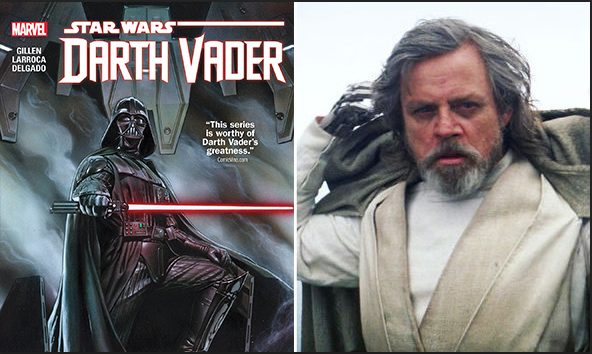 Did Darth Vader’s Comic Explain Why Luke’s in Exile?

Marvel’s new Darth Vader comic might very well have revealed why Luke Skywalker went into exile in Star Wars: The Last Jedi. All of the comic books, novels, cartoons, and even games have become a part of the Star Wars official canon, all of them tying together with the movies under guidance from Lucasfilm Story Group. One of the biggest additions to canon from the prequels was Order 66 or The Great Jedi Purge, which took place after the end of the Clone Wars where the clone troopers of the Grand Army of the Republic turned against the leadership of the Jedi commanders, destroying the Jedi order. In the Darth Vader comic, Lord Vader has been given the task of building a Sith lightsaber from Emperor Palpatine. In order to build the lightsaber, Vader needs to find the kyber crystals, which are protected by the Jedi to turn the kyber crystal into an evil crystal. This leads Darth Vader to hunt for surviving Jedi who have taken the “Barash Vow.”

A Reddit user posted a few panels from the second issue of the Darth Vader comic, which shines some new light on the inaction of the Jedi during the Purge. The panel reads the following.

Any Jedi pursuing Barash has sworn to refrain from activities related to the order , complete disengagement from anything but the Force. It is a type of Penance. While a Barash-Taker would have felt the Purge, they would not have allowed themselves to respond to it, or take action of any kind.

This does sound like what Luke has been up to on a secret island that has been removed from maps. The penance, were not entirely sure about, but could it be that Luke went into hiding after the training of Kylo Ren wiped out most of the Jedi order? The Barash Vow would explain why Luke was absent from The Force Awakens.

When The Force Awakens started, the Resistance and First Order had already been at war for many years, so the Barash Vow could very well explain why Luke is not on hand to fight against Snoke. This theory seems to make the most sense out of anything else floating around in the Star Wars universe. It seems to perfectly fit into what The Last Jedi could be all about. Marvel’s Darth Vader comic has been delving into Vader’s past and the use of the red lightsaber along with the use of the kyber crystals, which were brought up in Rogue One. Issue 2 seems to be getting into why Luke may have hidden for so long and it all makes perfect sense especially since it is officially part of the Star Wars canon. We still have a good six months to go before our questions are answered, but hopefully, the new trailer set to premiere sometime this summer, possibly at Comic-Con or D23 in July will start to give us a better picture of what The Last Jedi will be all about.