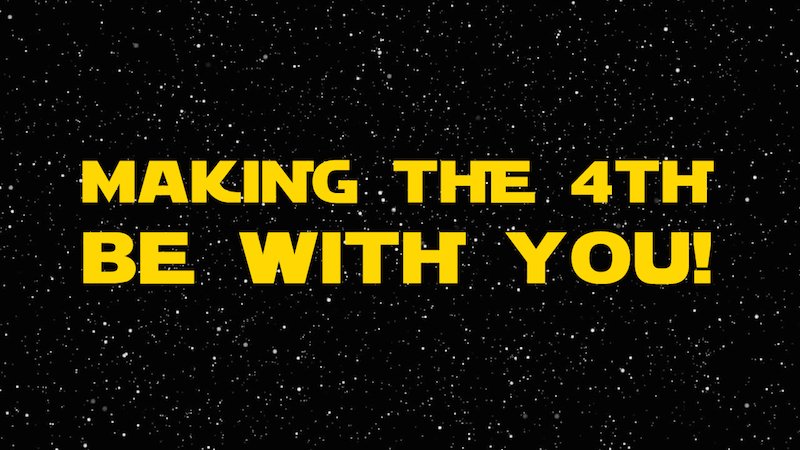 Making The 4th Be With You

With the resurgence of Force in the form of Episode VII: The Force Awakens and Rogue One: A Star Wars Story – which will thrive for years to come with all the Star Wars movies in production and lined up for release – this day will be celebrated by more Star Wars fans than ever before.

Why not make this May the 4th more legendary than the Millennium Falcon?

Here are 10 ways to pay homage to the best movie franchise in history: The big question is, in which order will you show the films? Will there be some Clone Wars episodes peppered in?

Fanatics of the franchise have surprisingly strong feelings about the proper viewing succession, so you’d better have that decided in advance! Even if you’re not at a Star Wars or other geek convention, it is absolutely legit to throw on your Jedi robes, Chewie Onesie – whatever!

If your boss allows it (or you ARE the boss and you allow it), go to work in costume. Better yet, inspire your coworkers to dress up too.

A great way to convince the powers that be is to make it part of some charity fundraising thing (e.g. pay $5 to be allowed to dress up, all proceeds going to a named charity). Admit it. You drooled (or swooned) when the ladies brought the guys a Death Star cake on Big Bang Theory. Look up a recipe and go for it! Make blue milk and toast poor Aunt Beru. Dip straight pretzels into colored icing for a fantastic array of edible lightsabers.

Or cook up some Galactic-style savory barbecue with a brand new TIE Fighter Grill! Buy a bunch of pool noodles of different colours. Wrap an end with duct tape and black tape (or color rectangular patches with black Sharpie) and voilà, you have yourself some American Gladiator style lightsabers!

This is something else that would make an awesome charity fundraising activity. Make sure you film the battles and put them up on YouTube! Sit down with kids (yours or others whose parents are OK with you…) and go to town. Instead of Secret Santa, do a Secret Sith Lord gift exchange. Who DOESN’T want a Death Star hackysack or an R2D2 knitted cozy?!

6. Pass on what you have learned, Yoda style. Introduce someone to the franchise. If you can’t find a Star Wars virgin (very possible!), randomly spout out life lessons with Yoda diction.

“Toilet seat put down you must, or nerf herder you are to women.” We’ve all wanted to do it: look like we are telekinetically lifting and choking the snot out of someone (or be the victim – whatever floats your boat!).

The Internet will be awash with Vadering images – why not add to the compilation? Post it with the hashtag #vadering and enjoy other submissions. There are some among us who are hardcore fans who put the rest of us to shame.

People have gotten married (in costume too!) to celebrate; others have finally asked people out (in the hopes of having a May the 4th anniversary in the future).

There is no more perfect a day to get that sexy Rebel Alliance tattoo.

9. Pick up a Star Wars Lego set or puzzle and put it together as a group (another activity that’s great for people with kids). 10. Show up for the Mouse; stay for the Wookie. Since Disney now owns the rights to Star Wars, you know that there are going to be themed activities in the Magic Kingdom on May the 4th and throughout the month.

Plan that vacay and suspend your “adulting”! How are YOU going to celebrate May the 4th? Will you be doing something wild and crazy (and possibly notorious)? Do you have to keep it subtle? Do you have ideas to share?