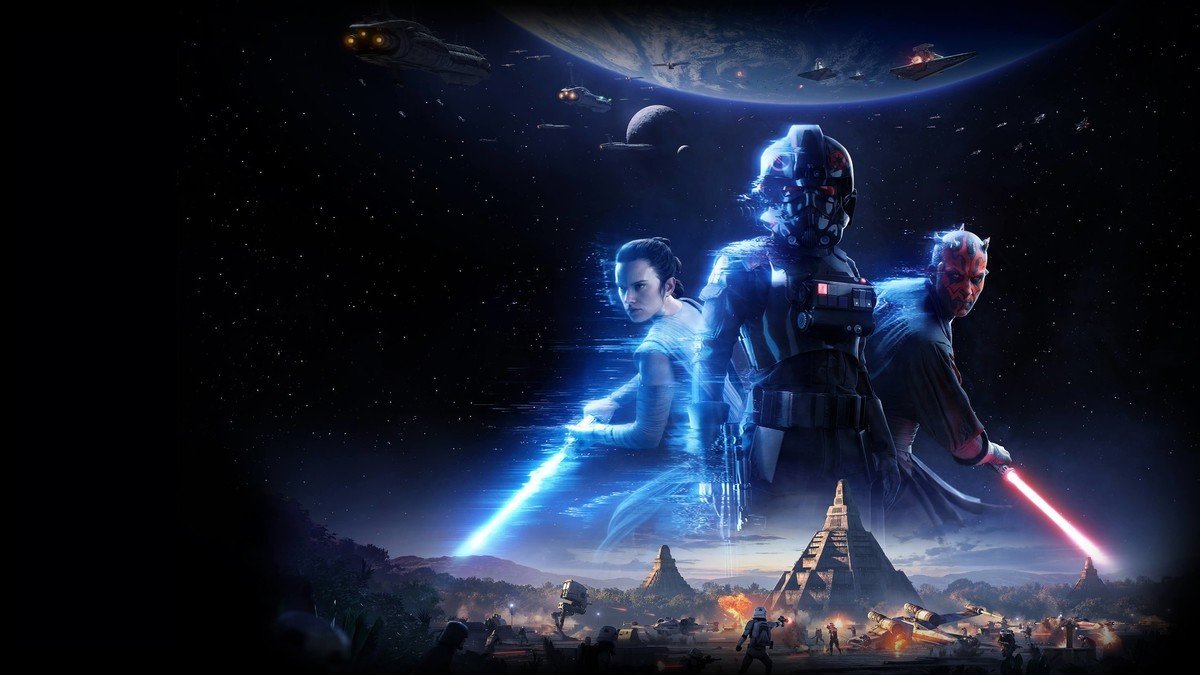 When Star Wars Battlefront came out back in 2015, it got a whole lot of people excited. A multiplayer game that dropped gamers into the original trilogy’s galaxy far, far away? And not only that, a multiplayer game created by the same developer that did the Battlefield series? It sounded like a dream come true.

Unfortunately, Star Wars Battlefront proved underwhelming. The Battle of Hoth was awesome, sure, but the flaws in the game reared their ugly heads quicker than you could say “nerf-herder.” For instance, the flying missions felt awfully awkward. Then there were the unimaginative skills and weapons. Worst of all, no single-player storyline whatsoever. Add it all up and you had what could only be considered a disappointment.

Still, Star Wars is Star Wars, so a sequel was probably inevitable. However, when a demo of Star Wars Battlefront 2 premiered at E3 2017, it became very clear that the developers had been feeling the heat from gamers. EA CEO Andrew Wilson even brought up the “constructive” criticism that his company had received in his opening remarks for EA Play.

More importantly, the Star Wars Battlefront 2 demo showed that EA had been working to address those complaints. The new game would have both a single-player campaign and a multiplayer mode featuring characters from the original trilogy, the prequels and the new films.

So, here’s the big question: Is the Force strong with the new game? On the basis of what EA provided at E3, it’s too soon to say. Still, after testing out the multiplayer and single-player modes for a few minute, there’s a new hope (sorry, couldn’t resist).

Contents hide
1 THE SINGLE-PLAYER CAMPAIGN
2 CLOTHING TEXTURES AND DETAILS POP OFF THE SCREEN
3 MULTIPLAYER
4 DLC, MICROTRANSACTIONS, AND WHAT COMES NEXT

The most promising aspect of Battlefront 2 (and the one that gamers probably want to know about most) is the single-player campaign. Its story follows the announcement that had been made Star Wars Celebration down in Florida last April.

Set during the 30-year gap between Return of the Jedi and The Force Awakens, the single-player campaign centers on Iden Versio, the commander of a fearsome Imperial special forces unit. After the Emperor has been killed and the Death Star destroyed, she and the members of her unit seek revenge against the Rebel Alliance.

The storyline for Battlefront 2’s single-player mode was written by two men. One of them is Walt Williams, who also wrote the story for the 2012 military third-person shooter Spec Ops: The Line. Gamespot reviewer Chris Watters gave the game a mixed review but noted how the story “strives to raise philosophical questions and put you outside of your comfort zone.” The second co-writer is Mitch Dyer, a guy who knows a thing or two about video games—he’s a former video game editor for IGN.

It’s also worth noting that Williams and Dyer wrote the story in collaboration with Lucasfilm’s Story Group. It’ll qualify as “canon” in the Star Wars Universe.

At E3, there was a short 15-minute sequence of the single-player campaign. It started with a cut-scene soon after Iden Versio and her unit have seen the Death Star explode. She goes to see her father, who is a high-ranking officer with the Empire. The Rebels may have dealt the Empire a crushing blow, but Iden tells her father that hope keeps any cause alive (an ironic echo of Jyn Erso in Rogue One). Then, a messenger from the Emperor arrives with the Emperor’s final order: Destroy the Rebellion. After that, the gameplay kicks in.

The first part of the gameplay involved Iden piloting a TIE Fighter. Next, she tried to pull off a sabotage mission while aboard a Rebel Blockade Runner (i.e. a ship like the one carrying Princess Leia at the beginning of Episode IV). The space battle felt like the original Battlefront, but not in a bad way. The flying controls were more precise and much less frustrating to use. The prompts that appeared on the screen and told you the different objectives were easier to follow.

Then came the part onboard the Rebel ship. For this section, you got to take an X-Wing fleet—and a number of Rebel scum—out of commission. It felt weird to attack and kill a group of characters that the Star Wars movies have always (or almost always) shown as true-blue heroes. Considering who wrote the storyline for Battlefront 2, that’s most likely the point. If the rest of the story builds on this and develops it well, it could make for an engaging and powerful gaming experience.

Anyway, back to the gameplay. Inside the Blockade Runner, you run around, shoot a bunch of Rebels and disable the ship’s ion cannons. A little flying droid assists Iden as she does all this: It opens doors and takes out a Rebel or two itself. This was all done very well, but it didn’t have anything especially impressive

A cut-scene played at the end of this section. This created the impression that the single-player mode will play out in a relatively standard fashion: A series of missions strung together with cut-scenes. We’ll need to wait and see if there are any surprises or new wrinkles.

CLOTHING TEXTURES AND DETAILS POP OFF THE SCREEN

The visuals of Star Wars Battlefront 2 were definitely a step up from the first game. The cut-scenes boasted a very impressive level of detail. You could see the texture of the snazzy officer’s uniform that Iden’s father wears. You could also notice the stitches in the shoulders of Iden’s clothes.

The gameplay had a lot of eye-popping details too. For one thing, the animation of the different Rebel fighters was a considerable improvement. Their movements looked much more detailed and lifelike than those of any character in the first Battlefront. Again, there’s no way to know whether or not the rest of the game maintains this high level of animation, but it’s an encouraging sign. If anything was particularly disappointing, it was that so little of Battlefront 2’s storyline came out during these 15 minutes. Although the little sabotage mission was certainly enjoyable, it left you wanting to learn more about Iden. After all, she’s going to dedicate the next 30 years of her life to being a thorn in the side of the Alliance. It would’ve been nice to learn more what she’ll do next.

Of course, there’s only so much story you can stuff into a one-mission demo. Hopefully, Battlefront 2 will have more when it ships. One thing was a little ominous, though: The representatives wouldn’t or couldn’t discuss how long the single-player campaign will be. That might be a caveat emptor right there (i.e. you might exercise a little caution before pre-ordering the game blindly).

The first Star Wars Battlefront wanted to reach as many gamers as possible. Consequently, it didn’t have the sophistication (precise controls, customization options, story depth) that more experienced gamers want. The developers tried to fix some of these problems with different updates, but that just made matters worse. To Motive Studios, Criterion Software and EA DICE’s credit, they seem to have built Battlefront 2 to be a multiplayer game for multiplayer gamers. For starters, they’ve introduced a new class system. Players have four different types to choose from, including:

The demo only let players pick their class and two types of weapons. However, the full game will have a lot more customization options.

Of course, one of the big draws of Battlefront 2 will be the chance to play matches in any period of the Star Wars films. The multiplayer demo was a battle from The Phantom Menace called the Assault on Theed. Here too, Battlefront 2 showed numerous improvements over its predecessor. One big difference was the introduction of “battle points,” which give you the chance to play more powerful characters as you collect more of them.

The miscellaneous feel of the multiplayer may not suit all tastes. Still, it was cool to see Darth Maul and Rey lay waste to a whole bunch of droids even if they weren’t actually on Theed (hey, you know some Star Wars fan out there is thinking the same thing).

DLC, MICROTRANSACTIONS, AND WHAT COMES NEXT

DLC was a major part of Battlefront: It let you add different locations and, eventually, add stuff from Rogue One. It’ll be a part of Battlefront 2 as well—the first installment will tie in with The Last Jedi (surprise, surprise), adding the planet of Crait as well as Finn and Captain Phasma.

Here’s a big change, though: All chapters of DLC for Battlefront 2 will be free. One thing that EA didn’t discuss at the presentation, however, was that they’ll try to make money through microtransactions. The Wall Street Journal reported that players will upgrade characters by buying special packages of cards.

Leaving all of these details aside, here’s the ultimate question: Will Star Wars Battlefront 2 make good on EA’s promises? Judging from the demo, it has a shot. But again, we’ll just have to wait and see.